Gift wrapping seems simple – well for some of us. Until you see the final, ribbon-wrapped product looks nothing like it does in the shop windows or on Instagram photos. It has happened to all of us at some point during the festive period. Even though gift-wrapping can seem a daunting activity to do, it can be made as a fun way to spend your afternoon and, there are many ways you can learn to do this such as joining a gift wrapping class. 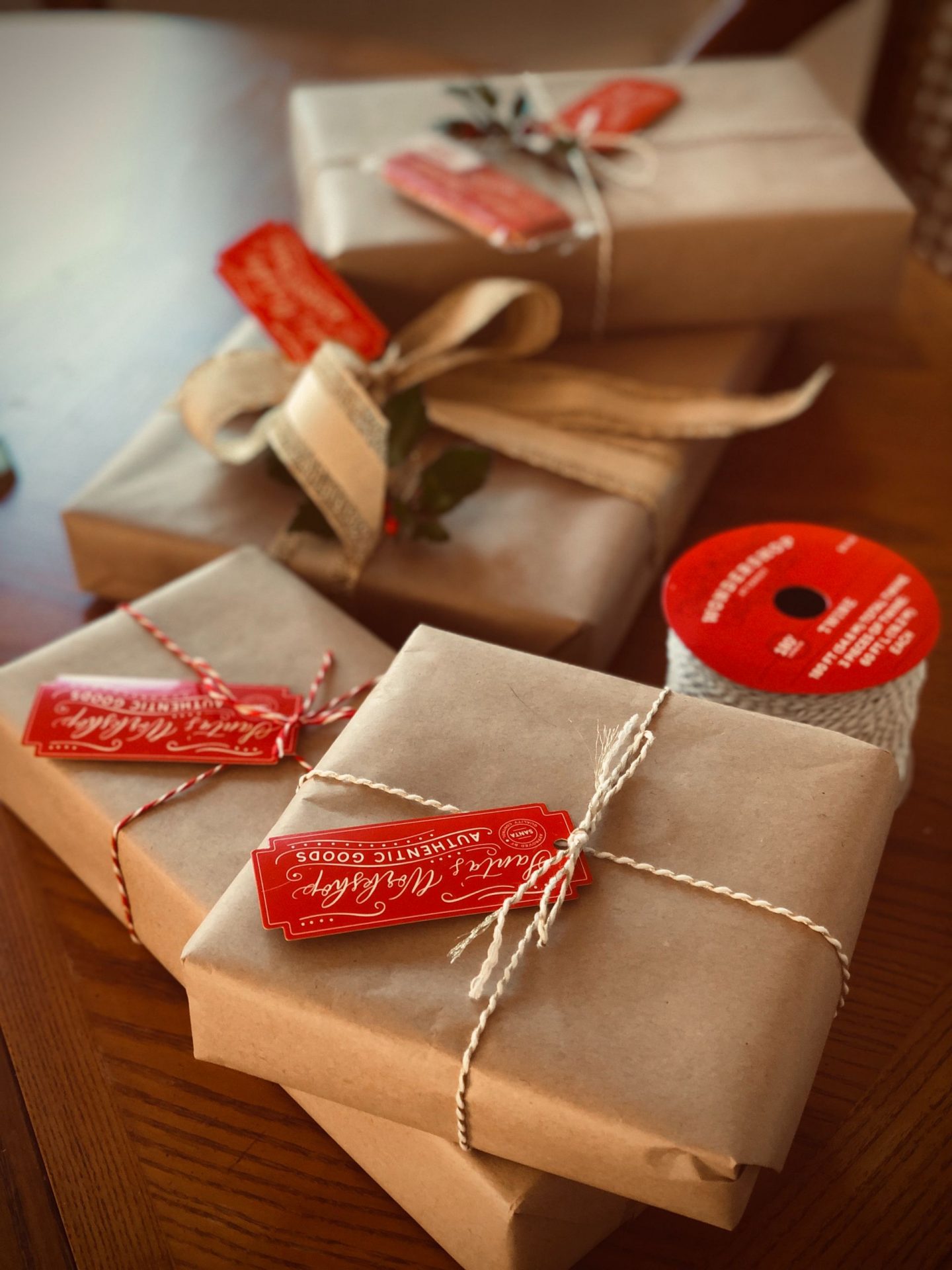 “It’s about spending that time wrapping and getting it all sorted. Have the lights on, put on a Christmas movie, have some mince pies do the whole thing,” said Louise Lewis, 40, Gift wrapping expert. She tells me her yuletide tips on learning to gift wrap and her techniques you learn during her Christmas workshops. 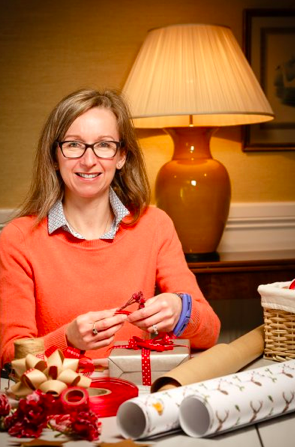 Hi Louise, we are so happy to speak to you. Could you tell us a bit about your background?
I lived in the North-East and studied at the University of Northumbria, where I graduated in 1993 in economics. I worked for Boots as a Saturday girl for years and, I took up working in a more permanent role once I graduated. I stayed with them for 22 years, but when I left I was like, oh my goodness, I didn’t know what I was going to do. People used to always tell me that they hated gift wrapping. They struggle with gift wrapping and, they would love to have somebody teach them how to do it simply and easily. I started teaching people from my kitchen table so they used to come to me and, I would run workshops from my kitchen too.

Where would you say your love for gift wrapping comes from since it is now your full time business?
I had creative parents and, I think I used to love Christmas and wrapping everything up. Working in retail, you come across the gift wrapping side of it and, that started to become more of a thing. I always enjoyed some of the big brands and I used to tried to copy some of that stuff to make parcels look more attractive. Some of the things you would not do for younger children because the last thing they want is fancy gift wrap. They are more interested in the box. If the gift inside is not much like a box of chocolates or example but its the extra impact of having it beautifully gift wrapped because then they know you have spent time doing that part of it as well. It just adds to the whole experience. 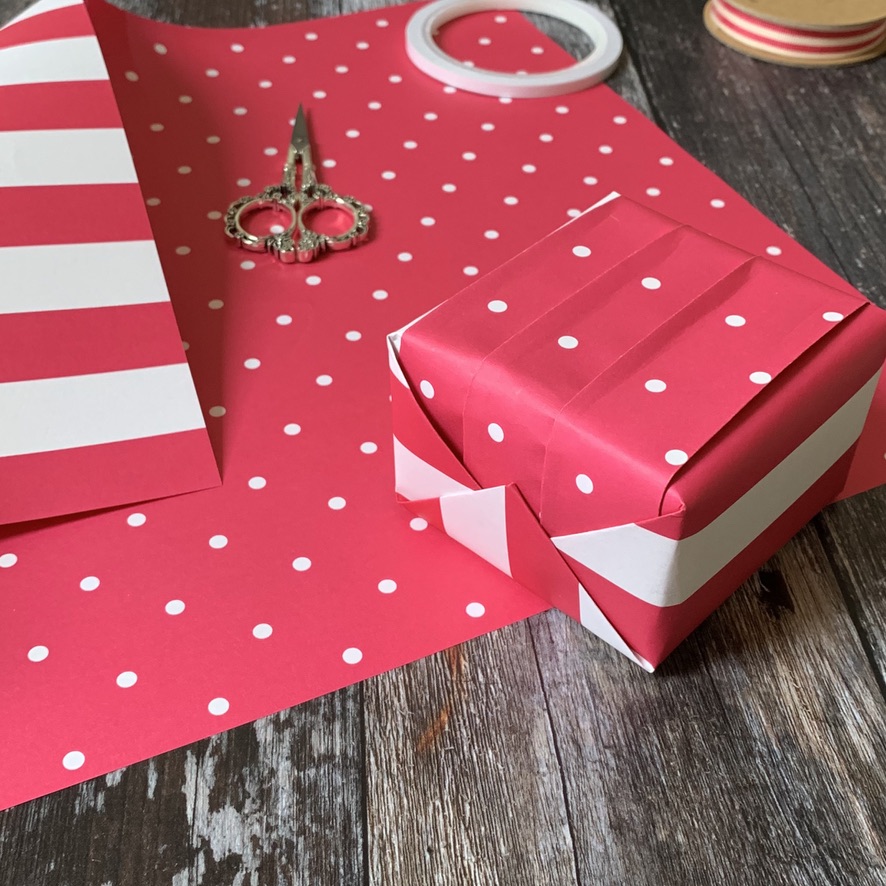 What would you say would be the average target audience of people interested in learning to gift wrap?
Judging by the people who come to my classes, I get a lot of mums and daughters or friendship groups. It’s very diverse because now I touch with businesses as well who are looking for something different to entertain clients or even their team. I do find it to be predominantly women. It’s like I said, I get a lot of creativity from my parents and my dad, he was a civil engineer and, he was very precise. A perfectionist. He used to make crackers and, they were always perfect. So I guess he has influenced me as I saw that growing up and that’s what he would do for my mum and, she loved it. It’s like if a lot of people can replicate that, then it’s all about the joy and experience of gift-giving its not just about a throwaway thing but it tends to be more women than it is men. 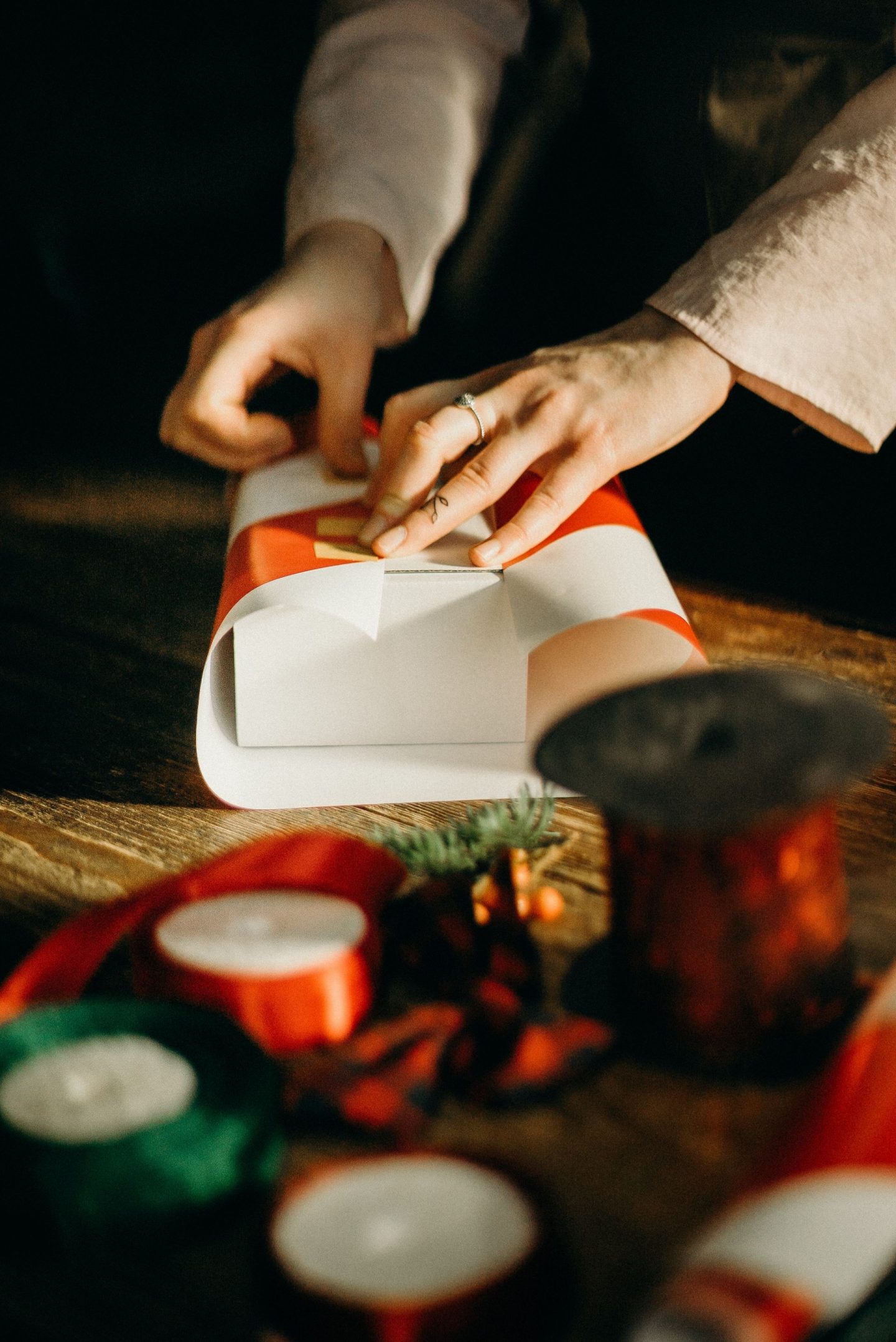 Could you tell me about what people would expect in your gift wrapping classes and the types you do?
When you get a group of people together and, you have everything laid out ready for them and, it’s that whole excitement of playing with ribbons and paper. I run 30-minute bite-size classes to break it down incase What is the most complicated item people are time poor they might not have two hours to sit and do a full class but, they can have half an hour to learn an element such as bow tie or how to, cut the paper without wasting it. I can spend time going round and showing them individually because if somebody struggles with something, you can go round and show them how to do it and they can practise it.

Would you say Christmas is your busiest time of year?
Yes, people need gift wrapping and, there are events throughout the year, but Christmas is the busiest time of year. Its time people are thinking about reaching out to have something gift wrapped or, they want to learn how to do it better which, is understandable it’s the biggest event in the annual calendar. It’s about spending that time wrapping and getting it all sorted, putting the Christmas tree up, have the lights on, have a Christmas movie on, have mince pies do the whole thing and, it’s that whole experience. 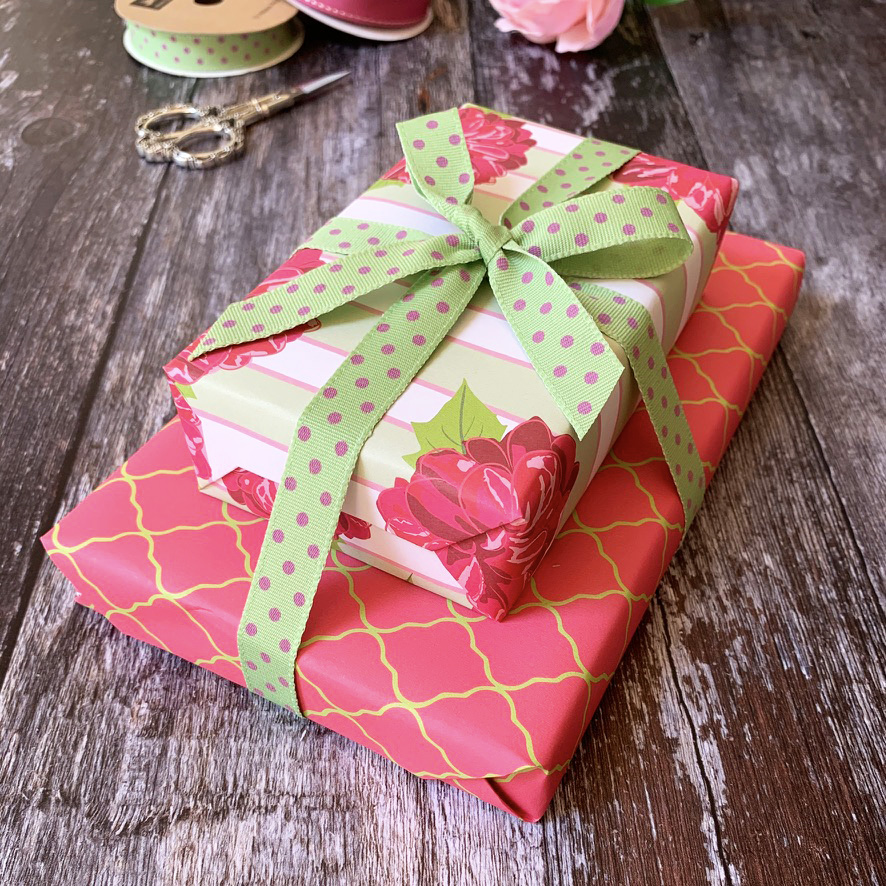 What is the most complicated item you have ever gift wrapped?
Teddy bears come up a lot because they tend to sit with their arms out but, I have wrapped a watering can before. There are linen effect table cloths from the supermarket which are amazing for wrapping because it’s flexible you can get creative with them. Otherwise, put it in a box and wrap the box. Keep it simple and, don’t feel embarrassed about putting it in a box and putting some lovely tissue paper inside.

What would be your favourite technique to use and why?
Oh, Japanese pleating is my all-time favourite. It is my most often used and favourite technique for things. It gives your paper a raised effect like 3D and, it’s all done through the folding and is one piece of paper and, it’s just the way you fold it and hold it in place. It adds a little detail and; it’s for the people who, you know, are going to appreciate a little bit more on their gift so it is nice to do. I like doing round things with that. 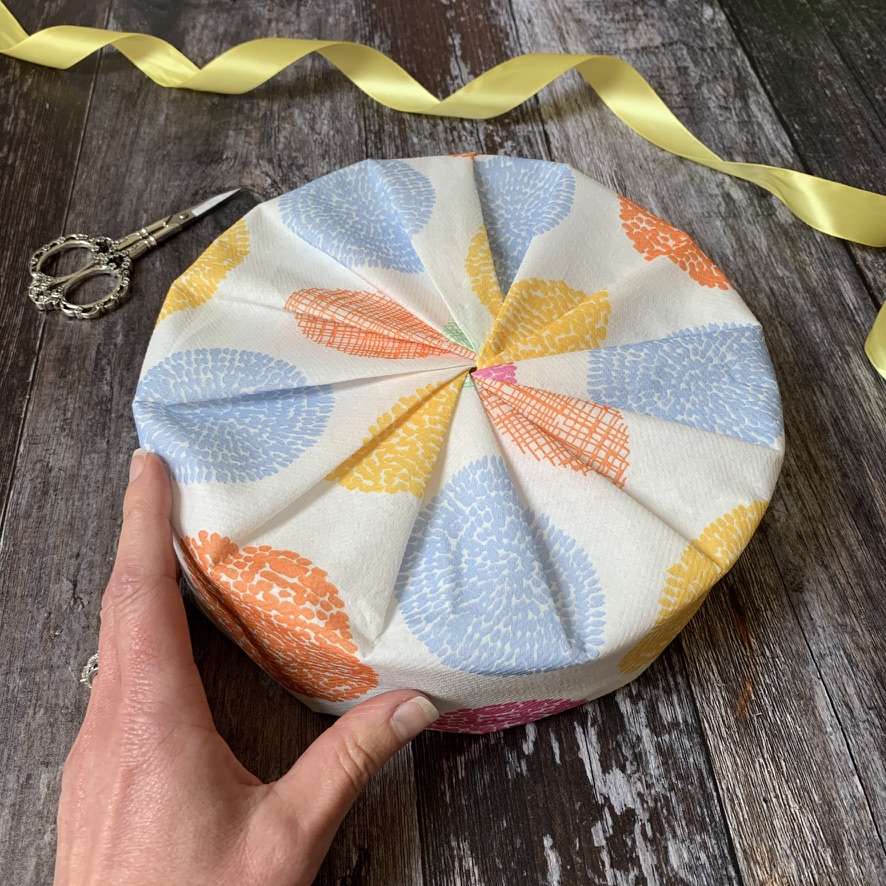 Since you are a gift wrapping expert do you find your friends and family will ask you to wrap their presents?
Strangely no, they don’t. People ask my husband if he is ever under pressure when he’s wrapping, but he’s not a bad wrapper. He has picked up a few hints and tips but, he is the one who gets asked more than I do. I wouldn’t comment on wrapping from somebody else, it’s the thought of the gift that is somebody giving you and the time they have spent which is more important.

Finally, do you have a theme when it comes to your own gift wrapping around Christmas time?
I would say I am very much a traditionalist when it comes to Christmas. I like red, green and a bit of gold with some white ribbon that goes nicely. I tend to stick to those colours and, I use a lot of that in my workshops as well. It just says Christmas to me.

You can now book classes with Louise Lewis now or if you want to find out more about her business visit her website here.